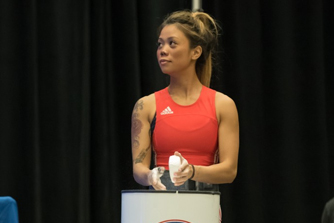 Cam is originally from northern California but is back in Tucson after a short tour in England working with the United States Air Force. Cam was one of the first members of 646, as well as the first hired coach in 2014!

In 2010, Cam fell in love with CrossFit while it was still in its infant stages. She loved the variety, the intensity, and the challenge that came with learning unfamiliar movements and found this new methodology of training refreshing after following traditional hypertrophy work outs in a globo gym. Cam enlisted in the military in 2011 and found her way to Davis-Monthan Air Force Base in 2013 where she began coaching CrossFit classes and eventually managed the base CrossFit affiliate for a couple of years. From 2016 to 2018, Cam lived in England while continuing to work with the United States Air Force. One of her biggest achievements while overseas was competing at the 2017 British National Weightlifting Championships! Cam was selected for a distinguished military commissioning program and chose to come back to Tucson to pursue degrees in the Arabic Language, Middle Eastern Studies, Military Science, and Sports Nutrition at the University of Arizona. She is still an active duty Air Force member and is proud to continue her service to this great nation while continuing to serve the local CrossFit community in Tucson. She devotes her life not only to her country but to her passions for health and fitness. She believes that CrossFit has the ability to engrain not only physical strength but also mental fortitude and believes that this is the greatest prescription for longevity and optimal health. Her main focuses are helping people move better and more efficiently while staying safe, working hard, and of course having fun!