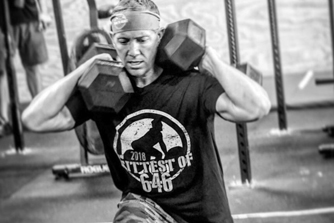 Sheldon was born and raised in Tucson and has been doing crossfit since 2013. After playing sports throughout high school, Sheldon found himself in his mid-30’s out of shape and doing little physical activity. After a few years of the same routine at a globo gym, he was looking for something different.

He tried crossfit and was hooked instantly.

Sheldon has been coaching since 2015 after receiving his Crossfit Level 1 Certification. He was inspired to pursue coaching after seeing how coaches impacted others with their fitness, health, and lifestyle goals. Sheldon enjoys coaching athletes of all fitness levels, believing crossfit is for everyone. “It’s not easy, but keep showing up. Give your best and work hard, the results will come”.

In his spare time, Sheldon enjoys spending time in the outdoors with friends and family. Crossfit has allowed him to pursue his passion for the outdoors. Preparing him mentally and physically to do the things he wants to do.