April 2015 ATHLETE OF THE MONTH 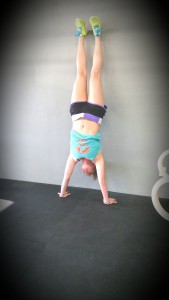 In April, Courtney spent a week in Peru, on a trip for her school. When she wasn’t making South America a better place, Courtney was back in the gym training even though it was finals at school.  This month Courtney reached a goal that 4 months ago she thought she would never achieve. She back squatted her bodyweight.*  4 months ago, she was squatting the bar!  Additionally, Courtney got her first kipping pull up and then she nailed the Master’s Qualifier Event 3 being the only female to do Chest to Bar Pull Ups Green Banded!*  Courtney has also referred 4 people to CrossFit 646 including Aaron, Josh, Heather and Ana!  Courtney even made a camio appearance at a Foundations Course Class and at Lululemon!  Pretty cool stuff.  Thanks Courtney for everything you do for our community! You’re a beast!