October ’15 ATHLETE OF THE MONTH

Jesse has been training at 646 for 4 months.  Jesse has told me on occasion how humbling CrossFit is.  I think we all can relate to that, and I believe that a lot of people become discouraged with CrossFit for fear of being humbled.  It’s HARD! You’re 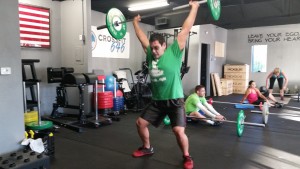 challenged every workout, not only to push your physical and mental work capacities, but you’re also asked to do the movements that you might suck at!  Jesse realized this phenomenon during “Nancy”.  The 95 lb overhead squats proved to be a true challenge for him and he had to drop the weight to 65 lbs to finish the workout.  That moment was where a person with a big ego might have quit CrossFit.*  Jesse didn’t quit.  In fact, he regrouped, faced the challenge head on and started asking questions and researching how to improve his mobility and strength.  He started staying after class to mobilize to help his positioning for the overhead squat.  Jesse hasn’t missed a mobility class since Nancy either!  Not only that, but during the month of October, Jesse has been doing two-a-days by taking the CrossFit classes in the morning and then the Olympic Weightlifting class in the evenings.  He’s also made every Sunday morning Track WOD.  In exercise/sport psychology we look at people’s psychological orientations to determine what will make a winning attitude for athletes. People who tend to perform well in sport have a high balance of ego (I want to win), task (I want to perform everything correctly), and social (I want everyone else to succeed and have fun being around others) mind sets.  In my opinion, Jesse would score high in all three areas. This attitude is what will continue to make Jesse successful in CrossFit, in life and continue to make him a cool person to be around.  Jesse also made one heck of a Zombie during the Zombie WOD on Halloween!  Jesse, thanks for killing it in the gym and congratulations for being October 2015’s Athlete of the Month!