JULY 2015 ATHLETE OF THE MONTH

Kristin has been a member of 646 since the beginning days in the Church!  In the month of July, Kristin attended over 30 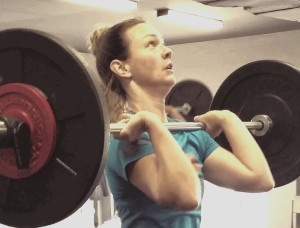 classes including CrossFit, Olympic Weightlifting, and Mobility.  Kristin is a jump right in type of person, which is why when we asked her if she wanted to compete in Olympic weightlifting she went online and signed up without thinking much about it.  She was so ready to jump in that she might have grabbed a friend and signed her up too! J  Since then, Kristin has been learning the sport of Olympic Weightlifting in the 646 Weightlifting Club Program while continuing with CrossFit classes and playing a lot of WAKA Kickball in between workouts!  Additionally, Kristin gave up a lifelong addiction…SUGAR!!  Apparently the gummi bears were happy to hear it.

She titled the sugarless mission, “Operation No Singlet.”   Kristin really doesn’t want to wear a singlet in her weightlifting competition in September so she bet herself that if she gave up the sweet stuff for two weeks that she wouldn’t have to wear a singlet in the weightlifting meet (that’s right…weightlifters wear singlets in competition).  Operation No Singlet was a success for KT, but we’re still trying to convince her to wear one!  Lastly, Kristin finished the edits on her first book!    Congratulations Kristin on your book, for giving up the pink starburst and for winning Athlete of the Month!